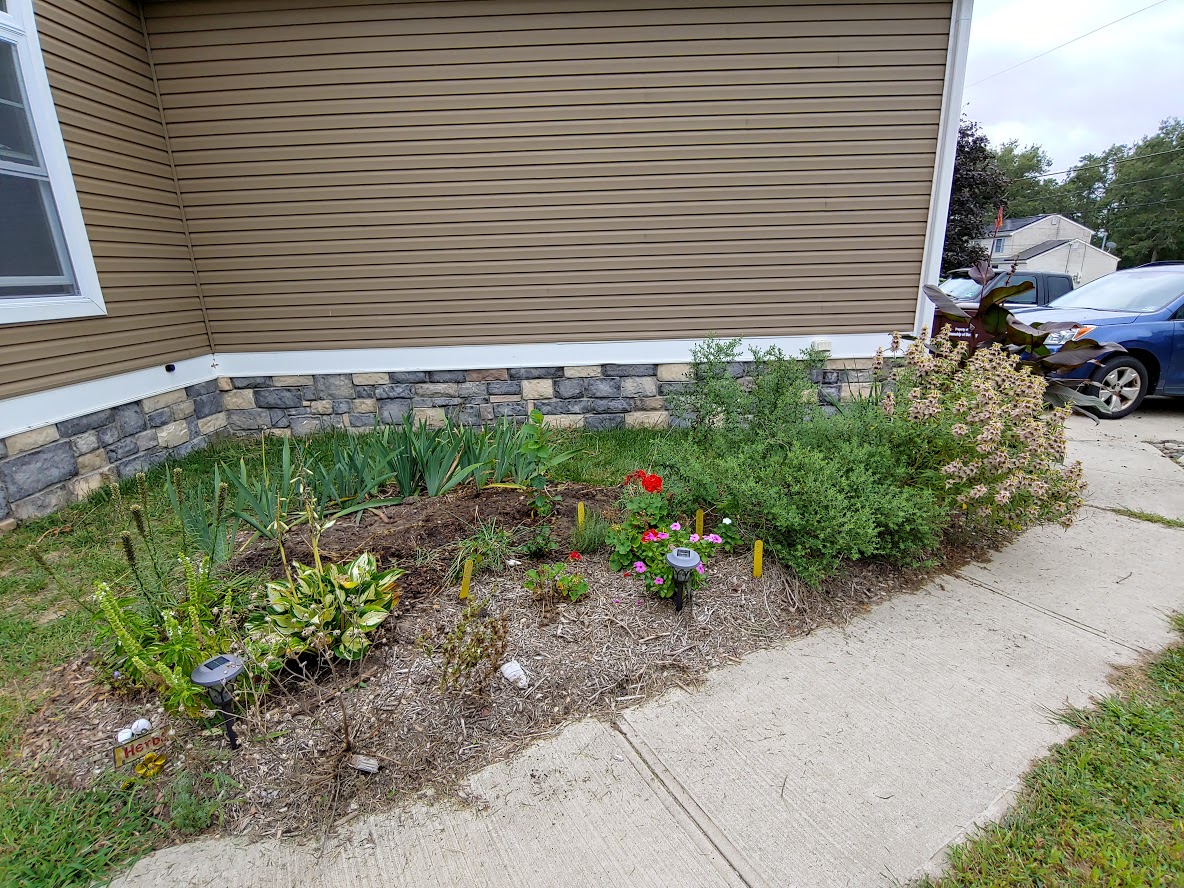 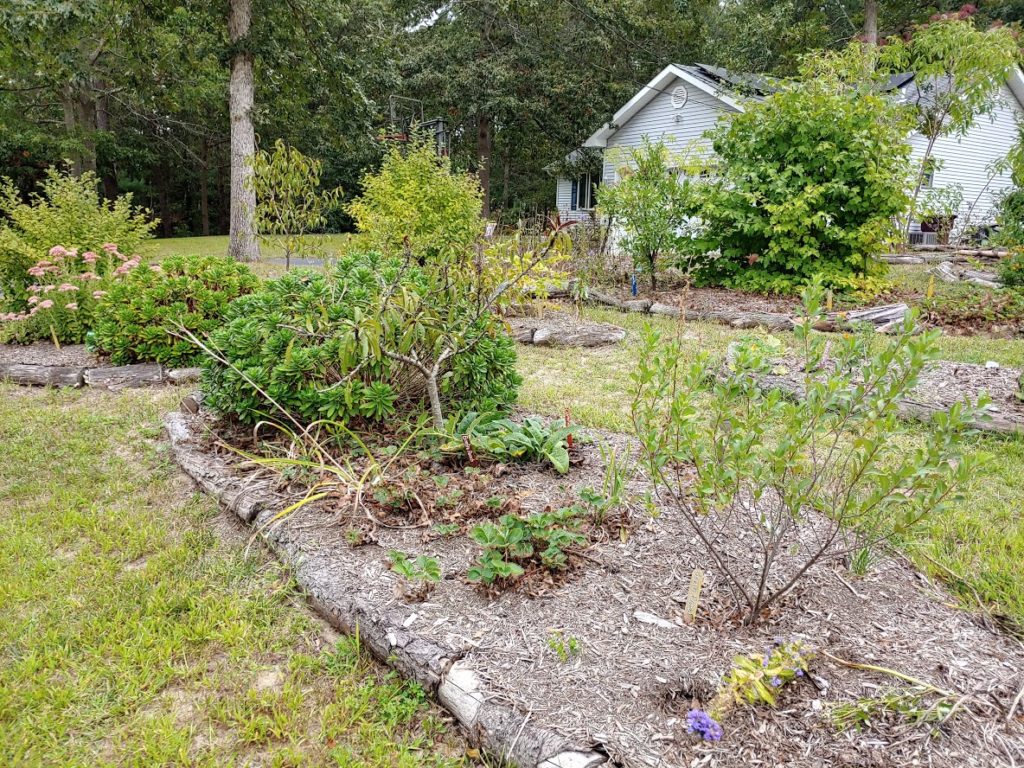 I assembled a batch of compost on Father’s day and have turned it at least a dozen times since. It definitely got hot 135* and then progressively cooler with each turn. The temp hovered around 100 – 110 most of the time it was active. After the last turn, I let it cure for 3 weeks before I began spreading it on beds. This year, I am doing some garden cleanup, rather than let everything go all skeletal over the winter. I cut back the raspberry canes (and accidentally cut down the groundnut, I hope it comes back), the asparagus and the beebalm patch. There are still lots of perennials around the yard with abundant seed heads for the birds to snack on.

Whether you’re sprucing up your garden or you work in landscaping, you need a lawn mower and whipper snipper combo that gives you precise control to carve clean lines on overgrown hedges. Matrix GmbH Australia’s cordless hedge trimmer and range of power tools are efficient and convenient to use for all outdoor maintenance.

The dotted mint was SO beloved by pollinators that I had to cut it down after almost a month of persistent blooms because the carpenter bees were getting obnoxiously protective whenever we would walk past along the path. I moved it to the meadow strip along the road – the bees can do their thing away from my front door. 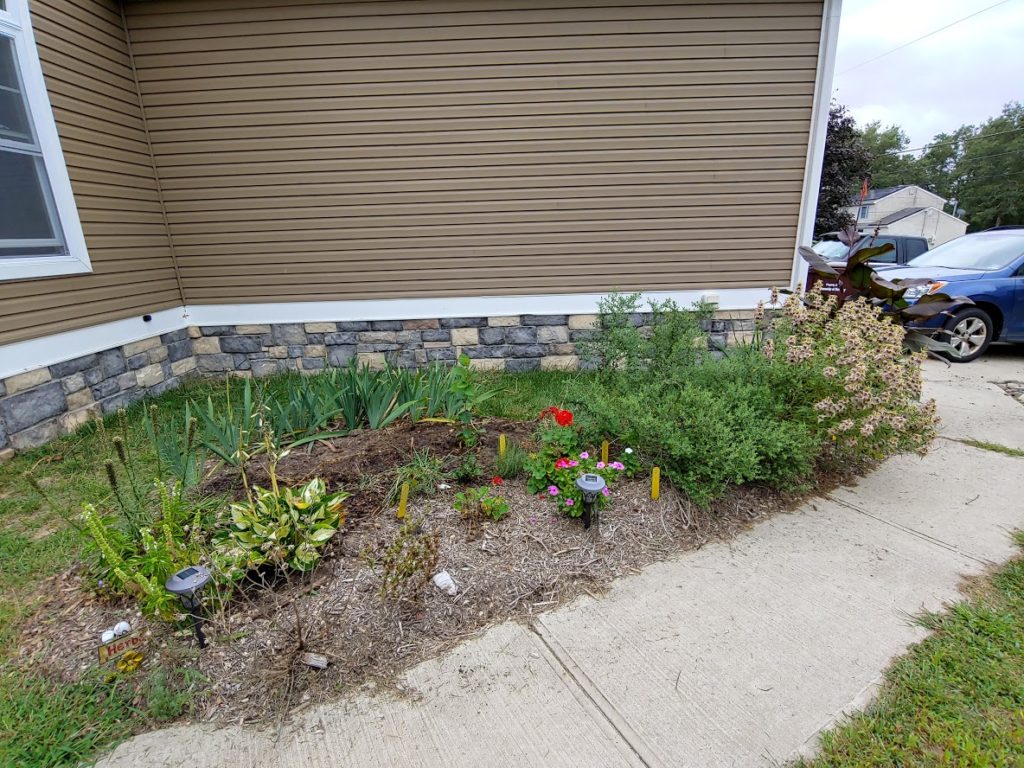 I continued the major renovation of that bed next to the path by removing the great cone flower and bringing it to the SHIP gardens at Jake’s Branch Park. It’s a beautiful native plant, but the spot was a bit too shady and it was reaching awkwardly to find the sun. Also, the hydrangea in this bed never bloomed in the 4 years we’ve been here. I think it got too cold in that shady corner in the winter and the canes died back too far… killed all the potential flowers. I took it out and replaced these two plants with a witch hazel and sweetspire. I tucked an ostrich fern (edible fiddleheads in early spring!) nearby.

The persimmon seedlings were planted out in the back corners of the back yard this month. I put out 4 of them, in case I lose one or two. The spice bush I put in last fall has died back but the stems are bendy and not brittle. I put another one close to the first… I hope they both make it. A nannyberry (a viburnum with a tasty edible berry) and a blue bean tree were also added to the back yard this month. 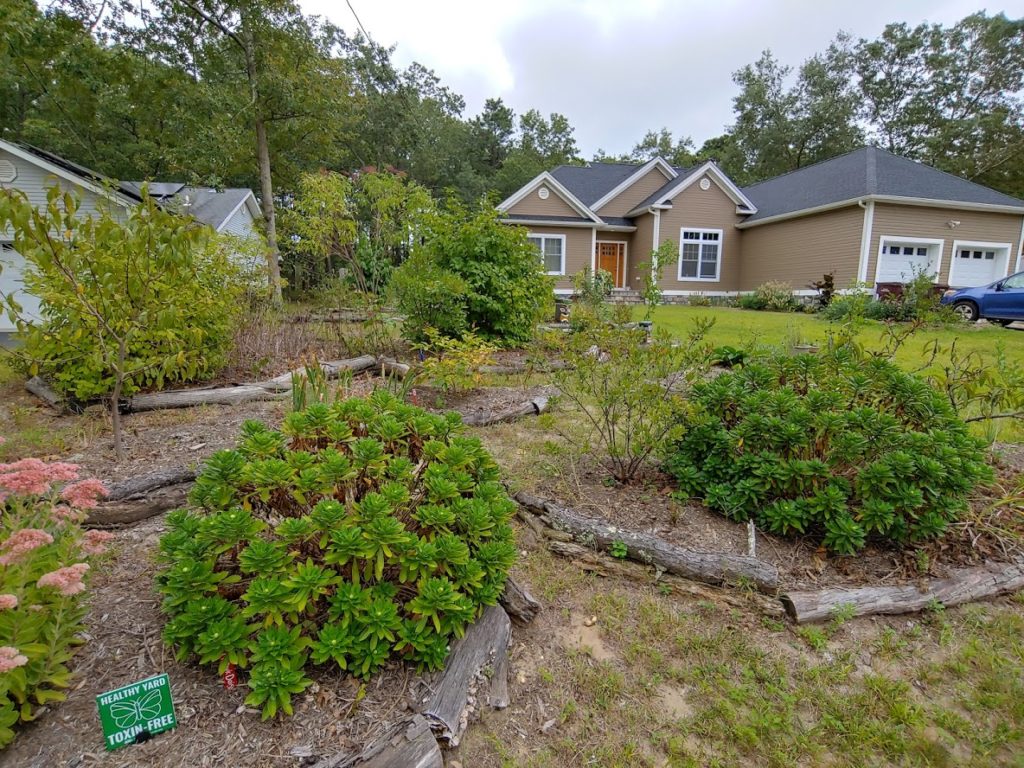 Most of the strawberry plants in the front yard beds have died back. I didn’t water with the sprinkler more than twice this summer because we did get a lot of rain, but I may have pushed my presumption of resilience too far. A jostaberry died, the white current may not come back and the blood dock sorrel look like scorched earth… dark shriveled leaves where the plants used to be.

Still waiting on many of the fruit trees to produce a harvest, but the yard did produce fruit. The paw paws haven’t fruited yet. A few apples formed early in the season but they dropped mid summer. The pear produced one fruit that is spotty and still hanging on the tree. The peaches were attacked by insects and fell during the summer. The figs became large, happy looking, swaying plants, but no fruit yet. 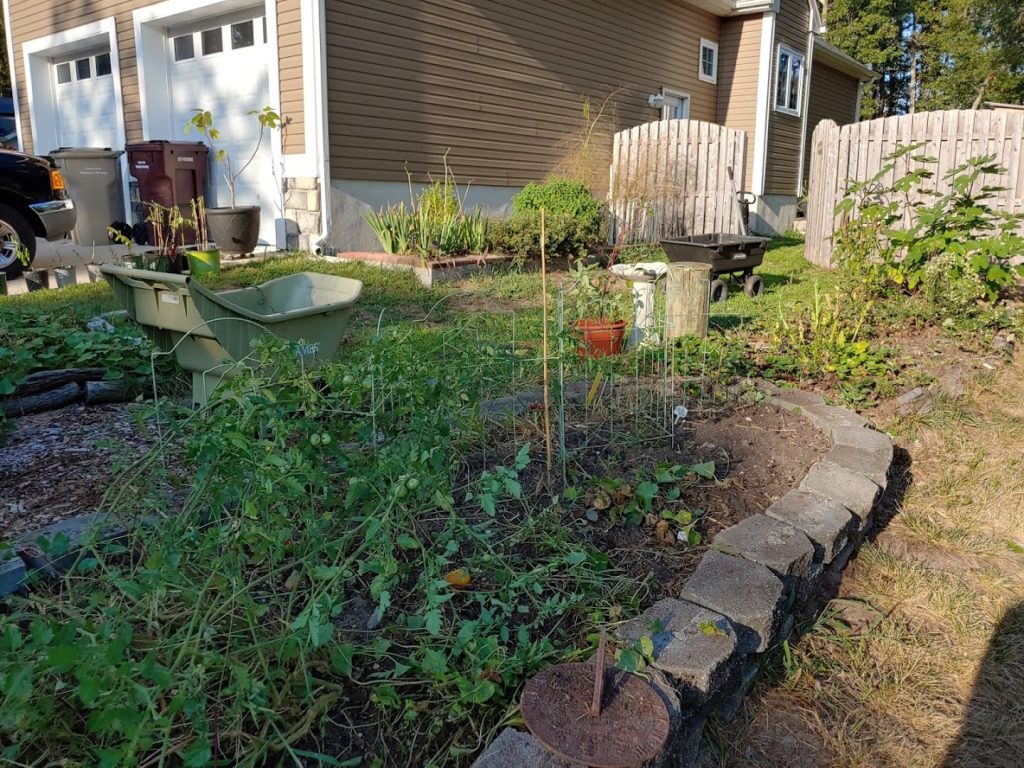 What grew successfully this year? The yucca plant I rescued from recycling center in the spring is doing beautifully! The jujube trees are super happy and put on a lot of new growth! I harvested a garbage bag full of ripe elderberries and put a bag of beach plums and black aronia berries in the freezer as well. The strawberries gave us lots of fruit in the spring and the heritage raspberry fruited quite a lot this year. The gooseberries produced dependably and the kiwi traveled along the arbor, giving that corner of the back yard an old world feel.

What’s left of the lawn filled in quite a lot this year since by this time there are usually some large open patches of sand showing through the grass. The rain garden has a wide halo of vibrant green turf around it’s edge… it’s extraordinary! 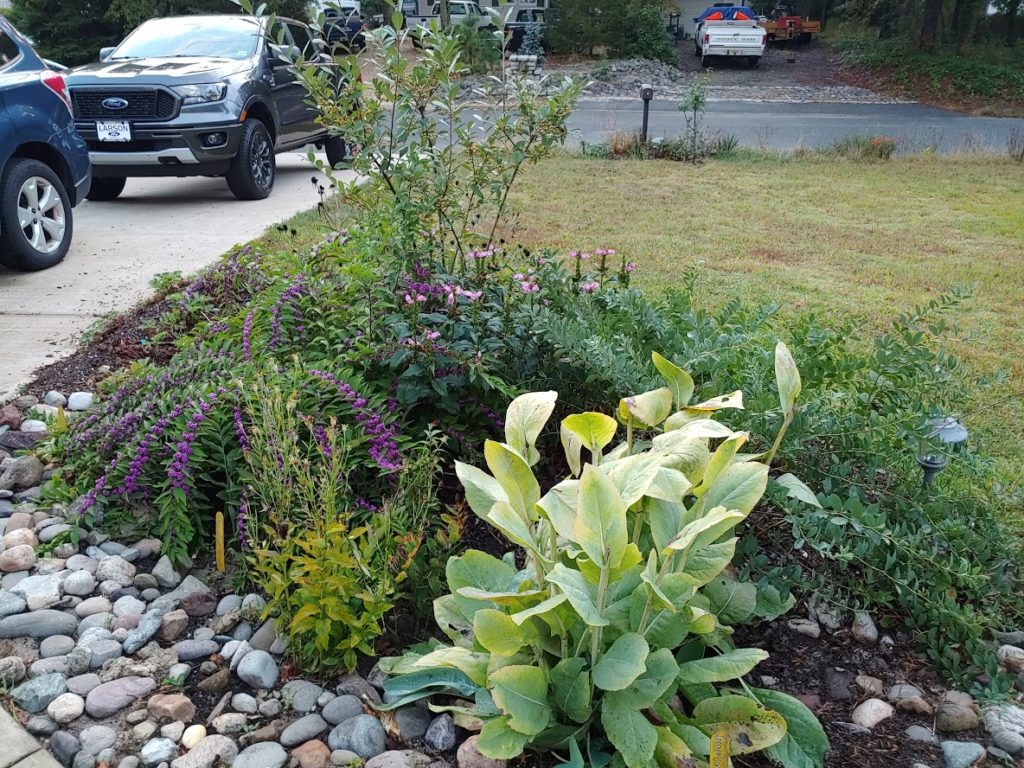 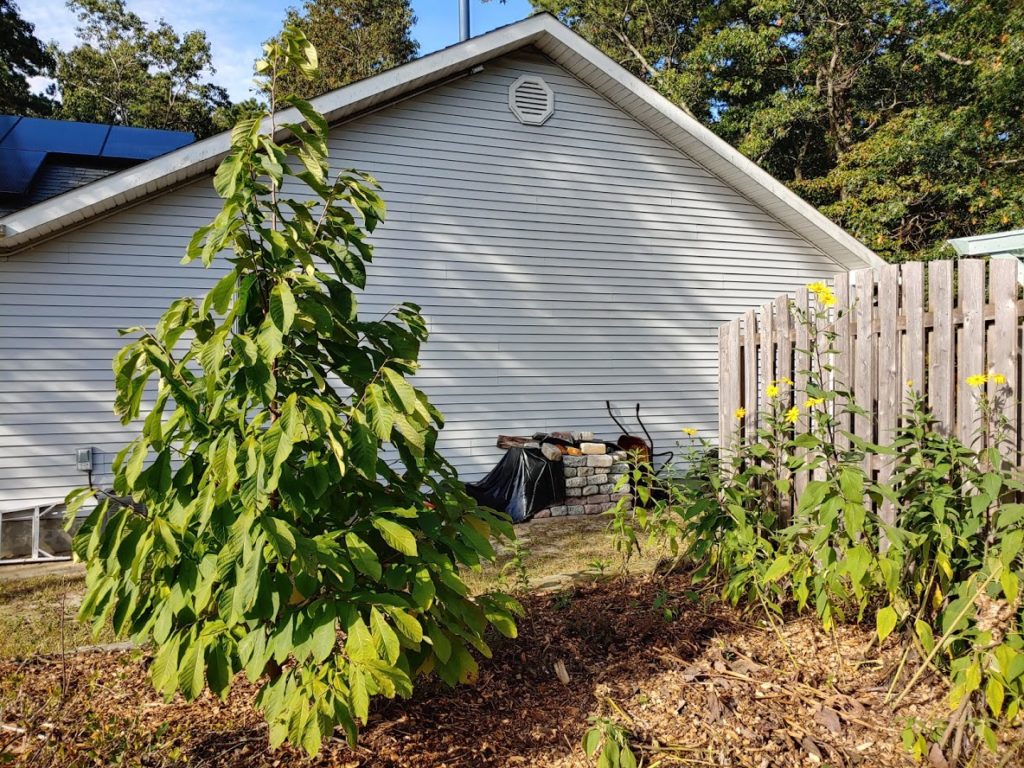 The old 2002 Ford Ranger that’s served me well over the last 3 years is being put out to pasture. We traded in my car for a lease on a new Ford Ranger! Waiting on a bed liner to protect the shiny newness, and then it will be ready for garden moving and hauling! In case you encounter with any truck accidents just make sure to schedule an appointment with the best legal firm near you. A truck accident lawyer can handle all aspects of your case while you focus on healing due to an accident that was not your fault. 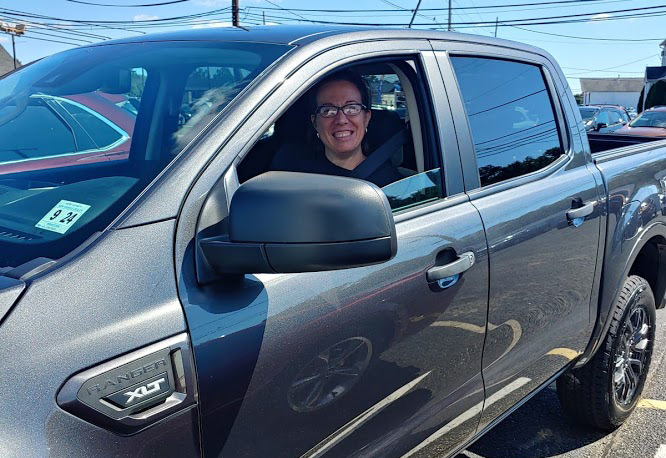