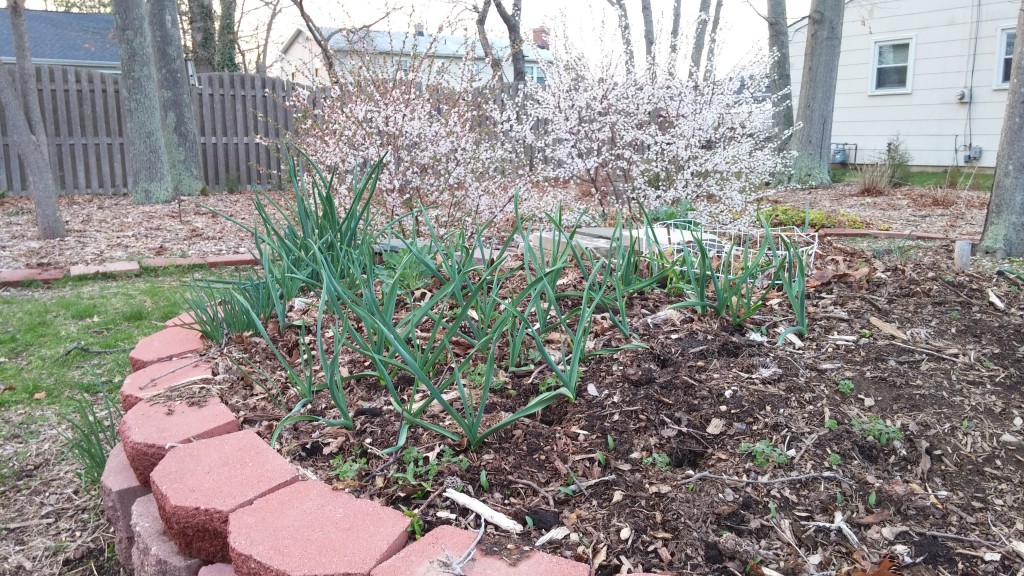 Dang, I forgot to take a picture of the Bonfire peach tree that’s blooming out there. I think I should always do my first garden photo shoot and spring blog post when the peach blooms. There’s just enough going on out there to make things interesting. The garlic showed up in the keyhole garden a few weeks ago and I’m pretty confident it’s going to be my best crop yet. It’s jumping out of the dirt and looks very happy there. The keyhole is also easy to weed and so I’m sure it will have less competition and better sun than anywhere else in the yard. 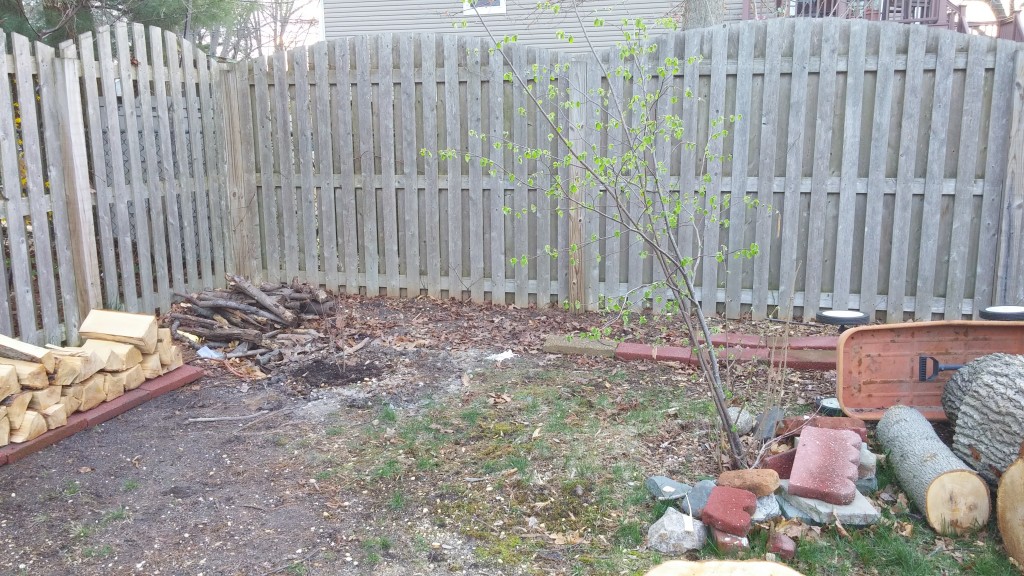 I bought another filbert to pollinate the one Mr. Potter gave me from his yard next door. Let’s see, I transplanted his right before the hurricane… fall 2012 and I’ve seen the little catkins and tiny magenta flowers for a few years now with no nuts to show for it. I got this new hazelnut from buckeye the ebay seller and it looks healthy and ready to go. I put it in just a few feet from the first one which was probably a good move because I don’t know if it’s a wind pollinated kind of thing or if the bees will do the work. The flowers are so tiny, I don’t know that they are all that attractive to bees. I actually hadn’t though about that till just now. 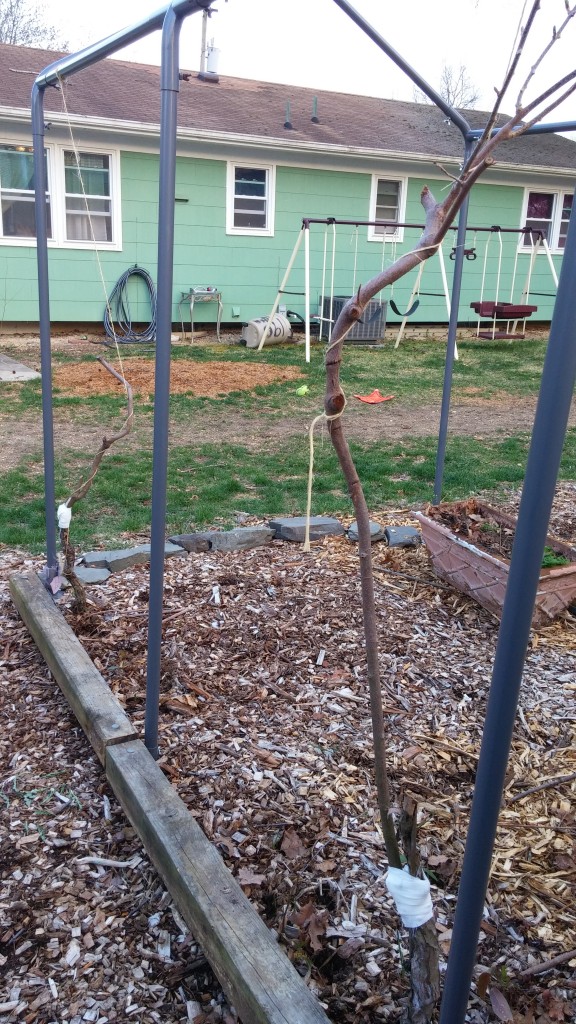 My ken’s red kiwis have had a tough time of it in my yard. I had them trained to a metal arbor until that fateful hurricane when I looked out the window and saw the arbor leaning heavily to one side. I ran out in the storm with clippers to cut the kiwi off the failing support and stowed the arbor where it wouldn’t hurt anyone or anything until the weather was over. That left the poor vines about 2′ high. They were troopers and came back strong in Spring ’13 where I trained them up another support which they completely took over and subsequently outgrew last year. I cut them back hard AGAIN a few weeks ago and used my old greenhouse frame as their newest trellis solution which I think, if they make it and survive, will do nicely. I noticed the plants were actually bleeding today from the cuts I made weeks ago… sap was dripping off the trunk. They are desperate to leaf out now but I may have been too hard on them. I got some cotton gauze and bandaged them up, hoping this will stop the flow. This may have been a silly move, but I haven’t googled the problem yet and it was the first thing I thought of. 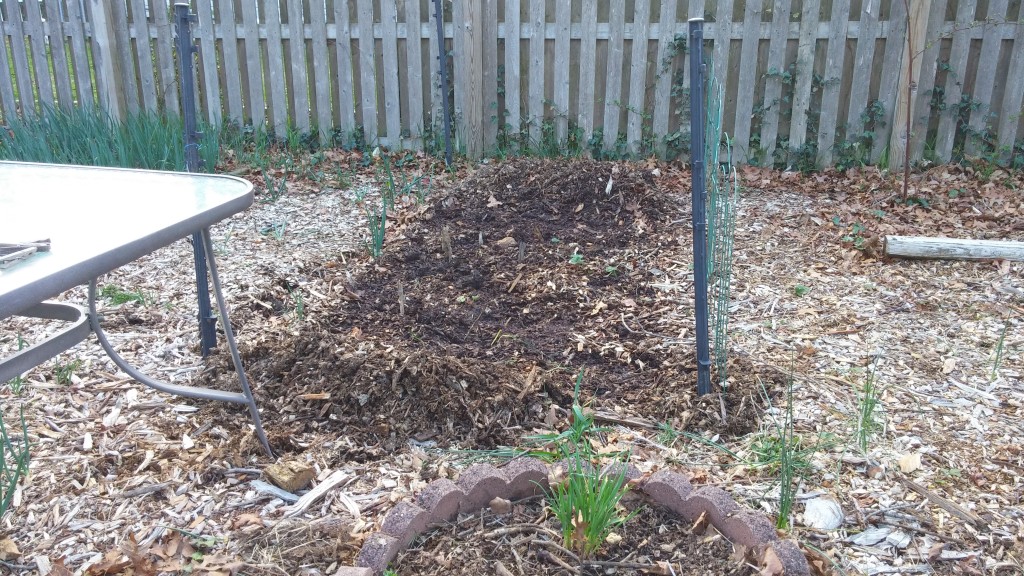 I bought a box of 20 earlyglow strawberries from BJ’s for $10 and put them in the old strawberry patch today. I’m fencing off the gardens individually this year to keep the dogs out and I’ve run out of fence so I need to go to Lowes to get some more. I raked back the woodchips from the strawberry patch and I hope these make it. The plants I bought from Walmart were dry and shriveled and didn’t come up and I don’t have much hope for those. The ones from BJ’s were slightly better, but the tiny bit of growth on the crowns was turning slimy and kinda gross. I’m hoping spring soil and some attention will liven them up and get them growing.

I also put in 2 new small blueberries in the front near the others bringing us to 7 bushes. These are Patriot blueberries and they are also from a 2 pack box I got from BJ’s. They are just a couple of tiny sticks right now, but hopefully we’ll have berries from them next season.

And here are some radishes I think just coming up to say “hi!” 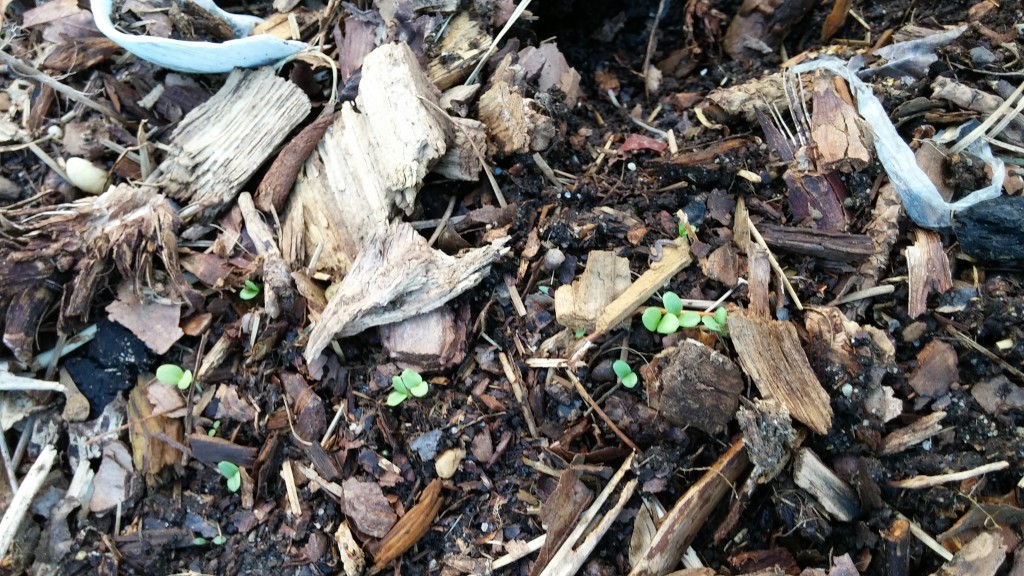