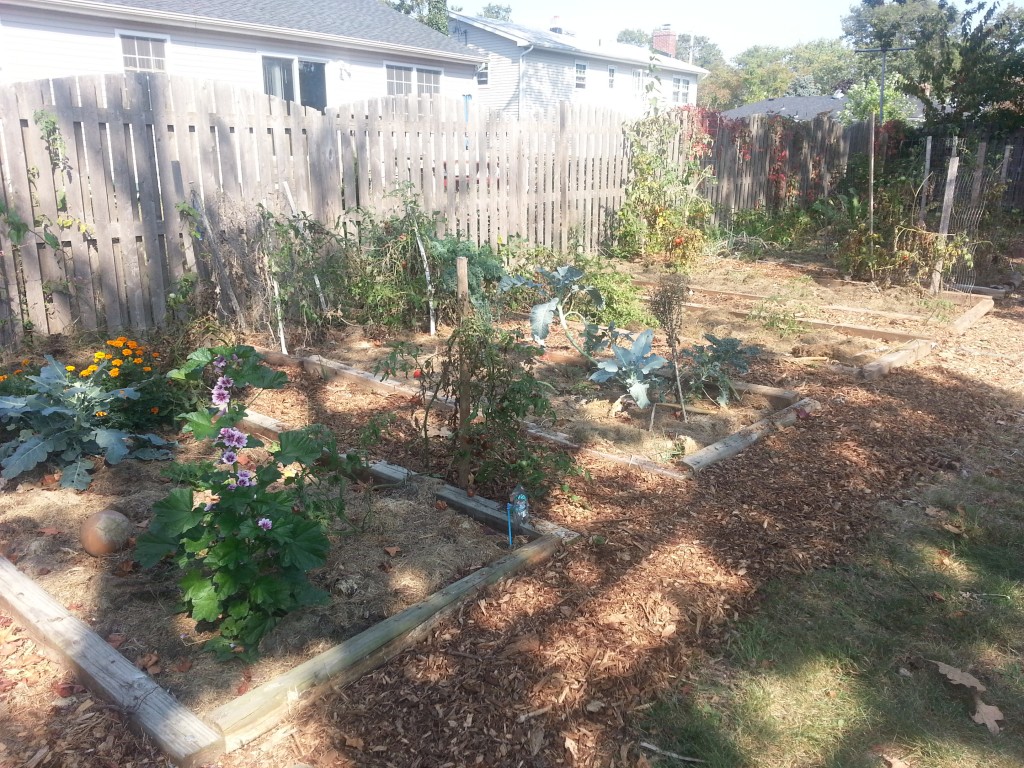 The back yard veggie gardens used to run parallel to the fence and if you view older posts on this site, you can see that setup. I set them up that way originally so they would run north/south and have the best sun exposure according to the garden books I had read.

Over the last couple of seasons, the railroad ties had gotten buried under grass, mulch and compost and visitors could no longer tell where the paths ended and the gardens began. I dug out those old railroad ties and changed the layout so now the gardens extend out from the fence. This may not be the best layout for sun exposure but will make them far more accessible to me and my wheelbarrow. I think they will be easier for me to organize crops in this layout and I’ll be able to grow more in the same amount of space.

There are still a few tomato plants hanging out in the new pathways, but once all that fruit is done, I’ll cut those plants to the ground and the paths will be clear. 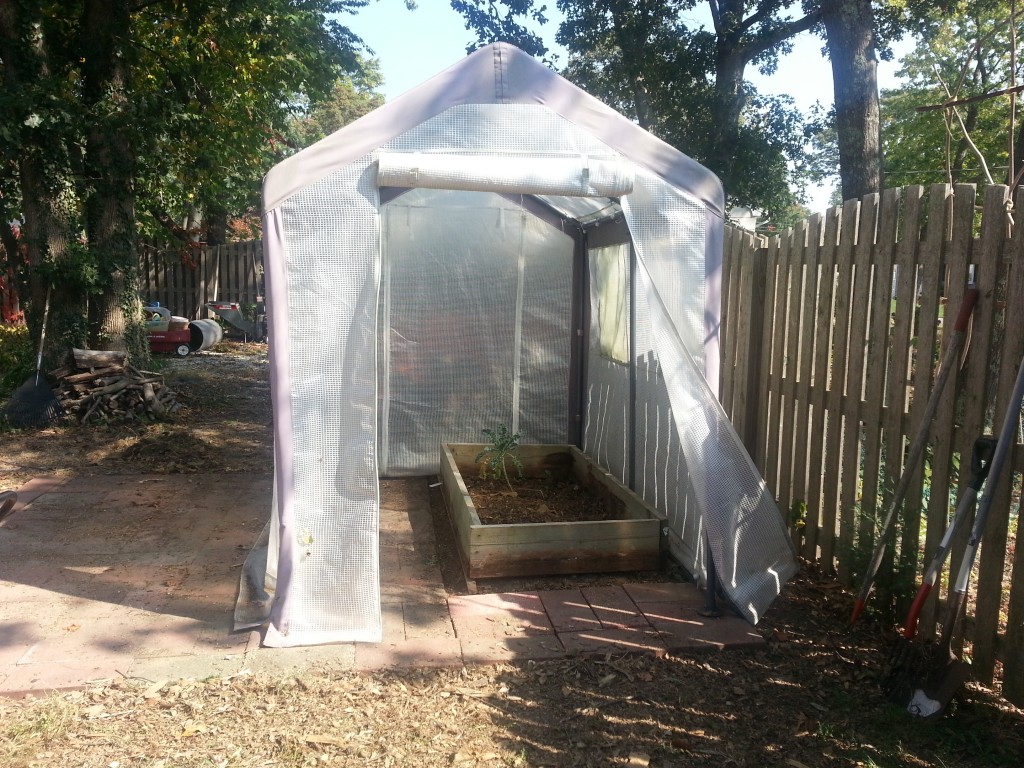 My good buddy Alesha helped me drag the green house out of the corner of the yard where I had been using it as a makeshift shed. We placed it over the bed I prepared last year and I’m going to give winter greenhouse veggie growing another try. It’s a hugelkulture bed that has 2 giant stumps buried deeply into a very heavy clay soil. I had mixed in compost and leaf litter when I covered the stumps again and the bed has been heavily mulched with grass clippings 3 or 4 times since then. It’s been kind of an experimental overflow bed for the other gardens… whenever I don’t have room for seedlings, I’ve put them here.

This greenhouse garden is close to the house, so I’ll be more likely to take care of it during the cooler months and I think I’ll have better luck with an in-ground bed instead of pots, since I’m not a great judge of greenhouse temperatures yet. I’ll need to get a thermometer to put in there so I can start to get an idea of how hot it will get. 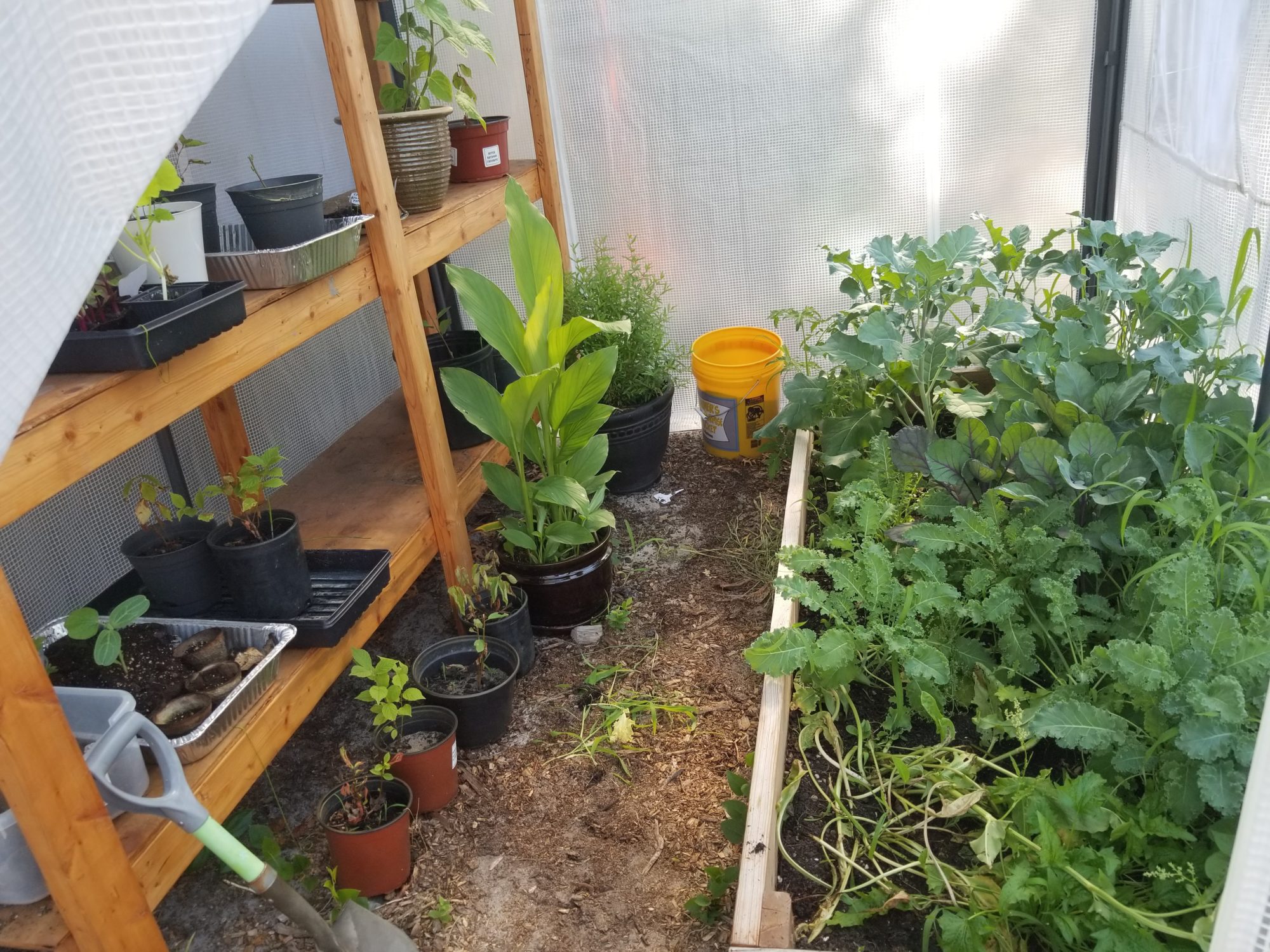 Garden progress and plans, the rain garden and the greenhouse in July 2018