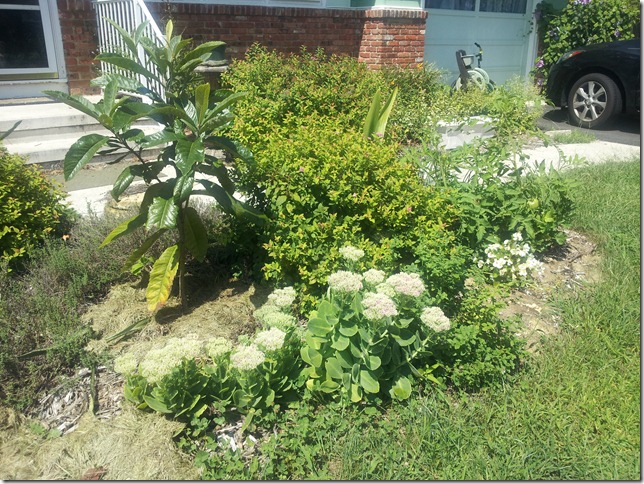 For the colors, the cleanup and the fallback, regroup that comes with moving stuff around, planting new things and planning for next year. I’m enjoying the tomatoes coming in from the yard and am frustrated by the puny growth on my brassicas which may be due to the heat or not enough fertility. I haven’t been adding anything to the soil throughout the growing season except for periodic layers of grass clippings. I planted so many beans this season that I haven’t been able to keep up with them and now I could probably fill a 5 gallon bucket with a very mature harvest. I wish I had some really large jars to try fermenting them – I found this recipe and video and I’d like to try this method. I need to buy a jar.

Here’s what’s happening out there now: 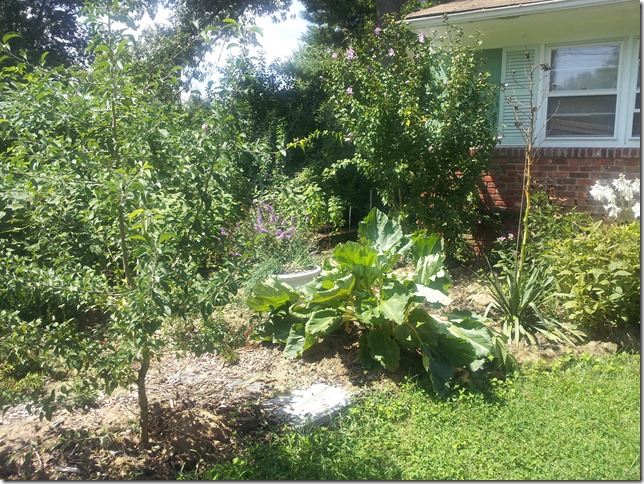 Behind the rhubarb, in the center of the photo, I have a large rose-of-sharon at the corner of the house. There WAS a big yew next to it last week. My neighbor has a lovely new hibiscus hedge running along the edge of the property and I noticed that the yew had grown so large that it was impossible to access the side of the house where the gas meter is. I didn’t do it on purpose Mr. Meter Reader! I cut down the yew and as soon as the blooms are done, I will cut down the rose-of-sharon too. I expect my Bonfire Peach tree to come any day! This dwarf peach will fill that space without blocking the path to the side of the house. The bonfire peach also has RED leaves which will look awesome in that spot, which is currently very green.

This will probably be one of the last few happy pictures of the loquat. On a lighter note, I looks like the sedum is starting to bloom. I love that fuchsia color and I see specks of it starting to show up in the blooms. 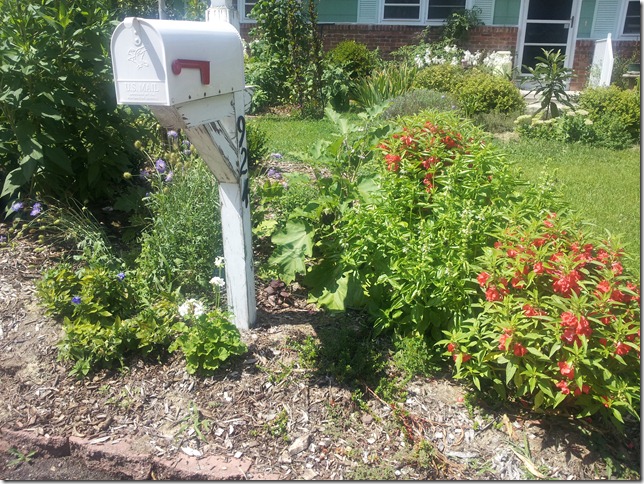 The mailbox garden is blooming and I’m finally pretty ok with it. Those touch-me-nots (the pink blooms) are going to spread like crazy if I let them reseed, so I think I’ll be cutting the pods and sharing them with friends. They are a reliable and sturdy flower that blooms in mid/late summer and stays for a long time. Reseeds EASILY. The picture below is where my first touch me not was planted last year. I probably dug up and moved 5 or 6 of them out of this group early in the season. This area gets only about 2 hours of sun during the day and though the plants are smaller than the ones near the mailbox, they are still blooming! 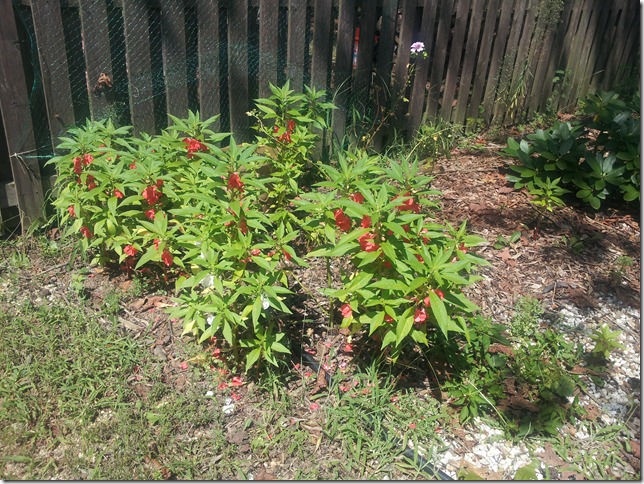 The sunchokes Jerusalem artichokes are racing with the elderberries to see who can get taller. Still no blooms on the sunchokes. I wonder if they will bloom at all this year? 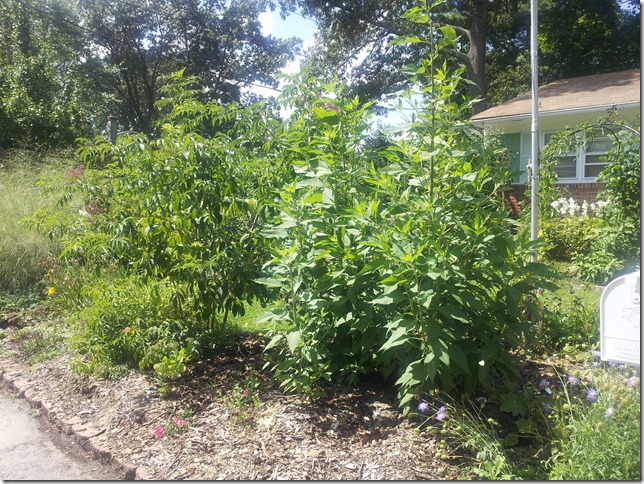 I made some elderberry syrup with the berries from the bush in the photo above (the big bush on the left). I used this recipe and method as a guide, except I used my Breville juicer to juice the berries. It was awesome by the way, and all the seeds went into the pulp basket without getting busted up. I don’t know why nobody talks about using a juicer when making this kind of thing, but taking the damn berries off the stems was time consuming enough for me. If I had to mash and squeeze everything through a bag or hang a sack and let berry juice drip into a bucket or something… oh forget it. I never would have made it. The syrup is so good and I’m giving a spoon to the kids every day because my husband has a sore throat and school is about to start. What a yummy way to stay healthy! 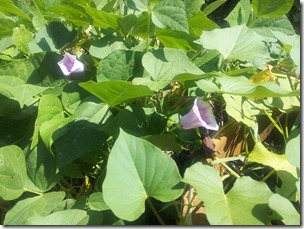 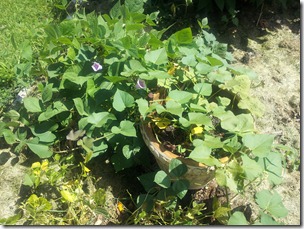 I had no idea that sweet potato plants had FLOWERS! haha. They are so pretty! It rained yesterday and there is water caught inside the bloom. I bet humming birds and butterflies really dig them. 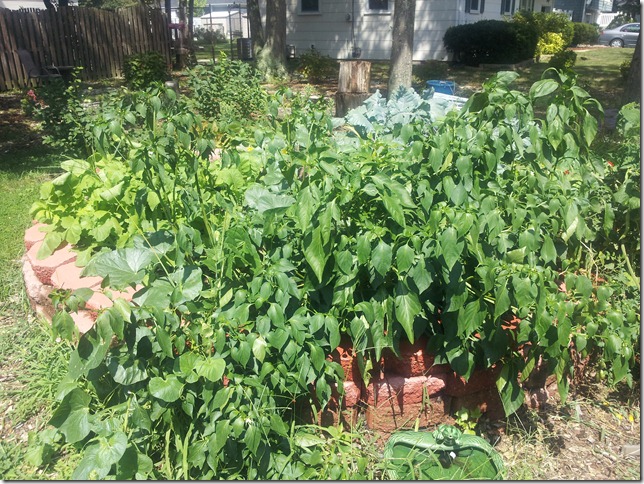 There is a keyhole garden under there somewhere! Lots of peppers, paste tomatoes, mustard greens and kohlrabi in there. 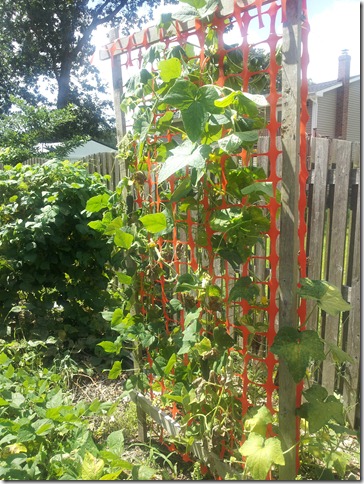 I will end this post with cucumbers, which are also ending right about now. I picked the last wimpy cucs off this plant today and I’ll probably pull it soon.