Did you know that if you cut the bottom off a bunch of store bought celery, put it in a shallow dish of water for a day and then plant it outside it will RE-GROW?! Neither did I, but I read about it online and gave it a try and it’s totally working. I’m amazed. 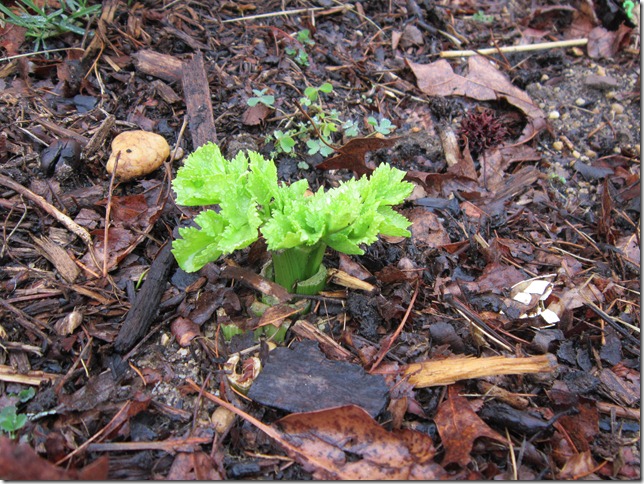 Miller Nursery sent me replacement Paw Paw trees after the 2 that I got last year didn’t like their new homes and up and died on me. I planted these in the BACK yard instead and hope, hope, hope they make it. The fruit sounds delightful from the descriptions of them and I’m going to be watching these trees like a hawk, waiting for them to start producing (and, of course, not DIE). I needed two trees to pollinate and I put them in the far corner of the yard, next to the 2/1 Asian pear tree, which is self fertile. 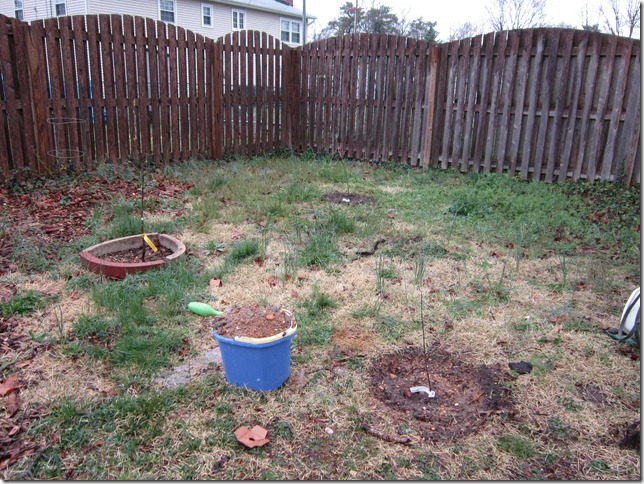 I got 4 new packs of seeds from The Seeds of the Month club today!! Cress, cucumber, borage and cauliflower. I’m excited about the cress because I’ve never grown that before. I don’t intend to use them as sprouts, but may nibble a few plants early to be able to taste the difference between young and mature plants. If I like them, I’m going to have to figure out how to harvest seed from them because there only seems to be a small amount in the packet. I’m not complaining though, I am loving my monthly seed deliveries!

The lapin cherry tree is blooming and I hear it’s supposed to get VERY cold tonight. Don’t freeze, don’t freeze… the gala apple has big buds too and I don’t want the blossoms to get damaged. 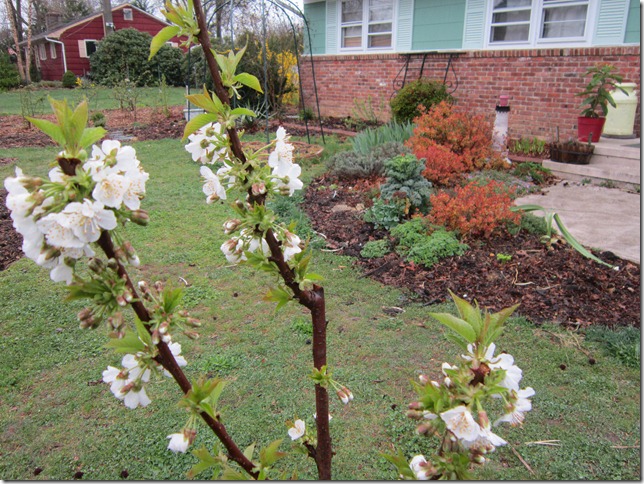 I still haven’t gotten a mulch delivery, though I have been emailing tree services from craig’s list and asking around.

My tomato seedlings are pathetic out there in the greenhouse. I started another egg carton of beefsteak tomato seeds because I’ve only got 4 seedlings out of the 20 something I planted a couple of weeks ago. Bah. The eggplants aren’t starting any better. I’ll need to start more of those this week too.

The potatoes are starting to peek through the soil at the bottom of the trash can! 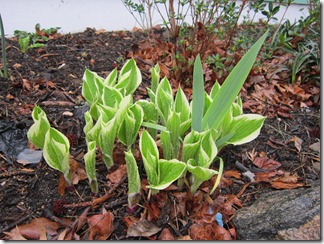 Oh, and I pre-sprouted some mammoth sunflower seeds and planted them around the flag pole to replace the lambs ears I dug out and gave away on the free-stuff craig’s list board. Talk about completely opposite plants! haha! I can’t wait to see the sunflowers. I’ve always wanted to grow those, even before I really wanted to garden. I used to work at a flower shop and those blooms were so stocky and hardy. They lasted a long time too. They were like a lovely peasant kind of flower. Hard working but beautiful and so big and substantial compared to other flowers.

I had considered planting pole beans around the sunflowers and letting them climb up the stems, but I did some searching online and found that other gardeners haven’t had much success with this process. The stems don’t seem to be bean-stalk friendly and neither plant ends up doing well. So beans will get a trellis and the sunflowers can grow on their own. 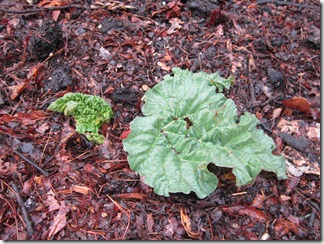 **update 3/31** I just took a look around out there and TWO sprouted sunflower seeds had been pulled up out of the ground and left there. Damn birds. I need some screen to protect the rest.

**update 3/31** This is the first spring this rhubarb has gotten to bust up through the garden and say hello.

I took pictures for this post a few days ago, but some of the plants have bloomed and already look completely different now, so I’ll need to go out in the morning and take pictures to post. I heard the weather is supposed to be gross tomorrow (cold and rainy) but I’ll go out there and take the pictures anyway. It hasn’t really rained here all week so I’m actually hoping we do get at least a short shower.

Wish me luck on winning the HUGE lottery so I can promote and fund organic, non-GMO farming initiatives (and be filthy rich too). 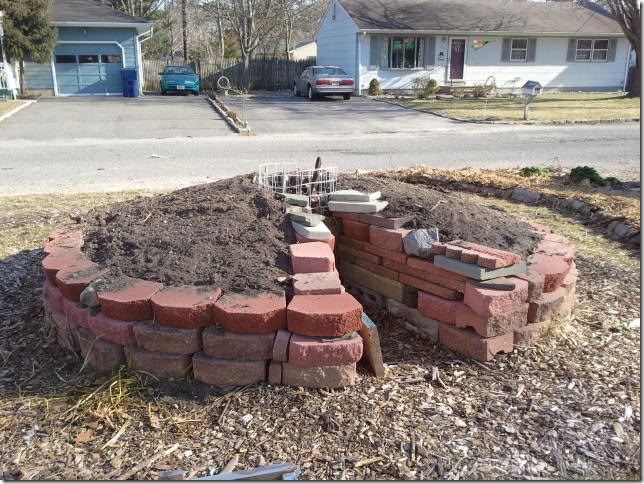 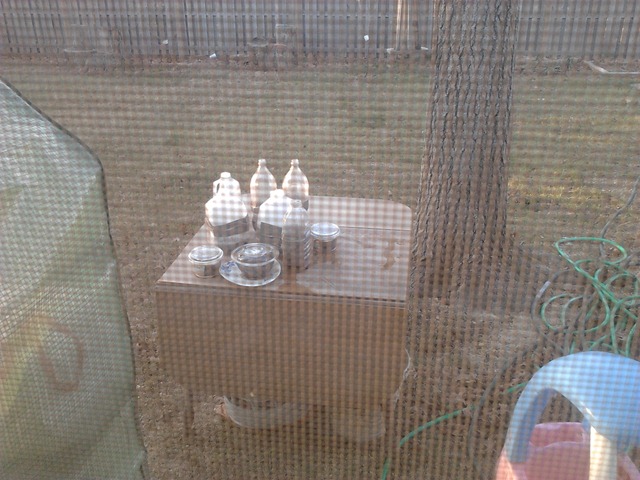 Winter Sowing and a Keyhole Garden 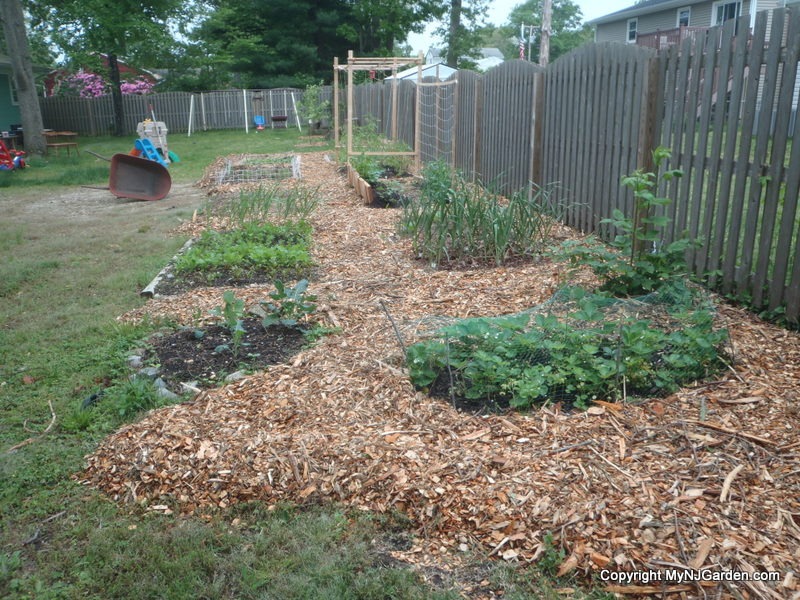 I can move mulch mountains!