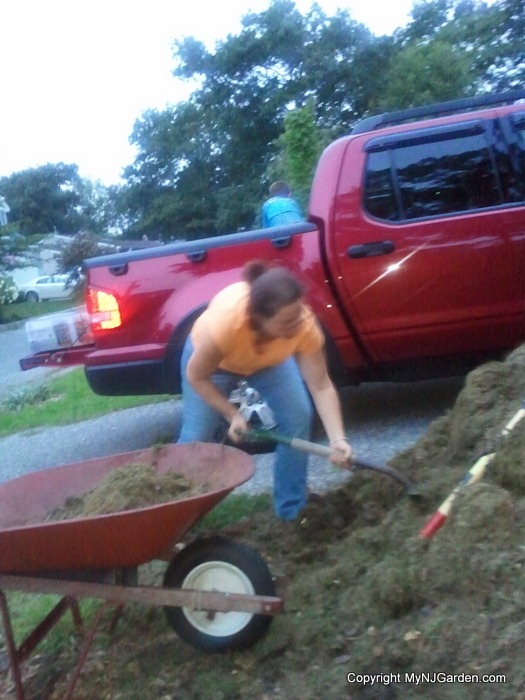 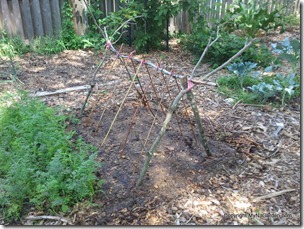 We’ve been getting a lot of rain this week which is great for my garden, but not so fantastic for my husband’s vacation. I almost feel bad for being so thrilled about it. I recently planted what is probably my last set of bush beans in the garden to replace some of the spent zucchini plants. I planted peas along this little stick trellis (see the photo) to replace the turnips and some lettuce to fill in spaces here and there. I tend to stink at germinating seeds in the summer because I let things dry out too much out there, but the rain has really been helping me out. 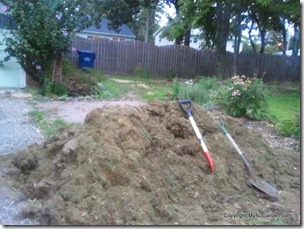 A friend of mine pointed out a local landscaper who posted an ad on craigslist offering to dump a truck of grass clippings to be used in compost and as mulch. I went for it and had him bring me the grass last Saturday. I will NEVER do that again. The pile was only half as big as the huge pile of mulch I that I had dumped on the driveway in the spring but the grass was WAY more of a pain in the butt because of the SMELL.

I’ve read a lot about compost and I knew that a pile that had too much green matter could get stinky, but holy moly, there is no way I thought it would be that bad. My compost piles have always been carbon heavy because I always have WAY more leaves than kitchen and compostable garden waste. We’ve got a lot of trees. But a truck load of grass clippings is a LOT of green and that stuff got HOT and slimy and smelly real fast. I layered up my compost pile and then spread the rest as mulch, but I tell you it STILL smells like a horse stall outside my front door and the flies are just all over it. I was kind of hoping that once I spread it out it would dry out some and stop being stinky, but the rain has kept it moist ((shiver)) and oh, just gross. 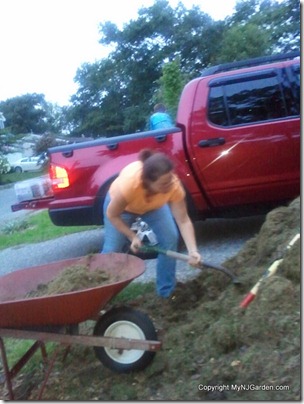 I have to go into this much detail about it because I need to remind myself how awful dealing with it was. You see, after just a day or so I can already see a significant difference in my gardens. My dry summer gardens just LOVE the grass + rain and I’m afraid I’ll forget the nastiness for all the lovely boost my plants will receive. 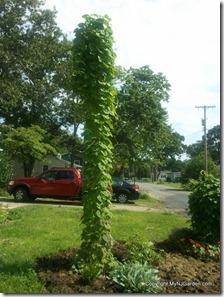 Speaking of a boost – check out the morning glories! There is a flagpole under there somewhere. I never thought they would get that insane. I can’t help but wonder, how the hell am I going to get them OFF of that thing when they freeze this winter? I think I’ll have to take the flagpole down to do it.

As for the keyhole garden – I couldn’t be more thrilled with a garden project than I am with this! The greens haven’t quit the whole season and that volunteer watermelon vine that came out of the compost has 2 huge melons on it! I wish I had ANY idea when to pick them – I would hate to waste them by picking them too early. I think that after everything freezes this winter and a few weeks before I plant in spring, I’ll empty out the middle compost bin, mix it all into the rest of the soil in the keyhole and start again with a new compost mix in the center. 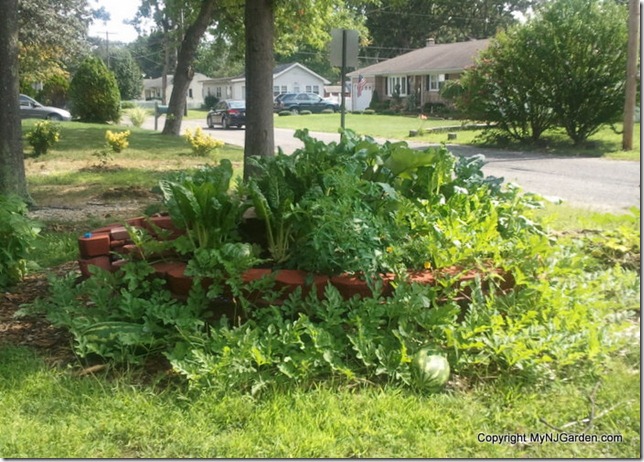 Here are some flowers that are blooming that are brand new to my gardens this year. 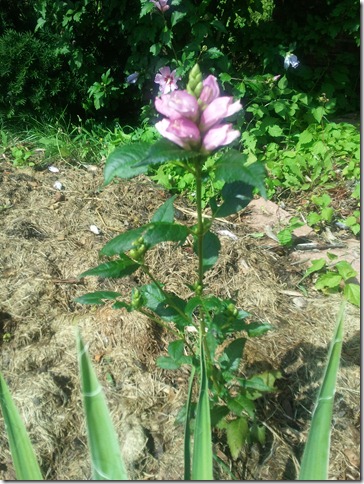 “Turtleheads” transplanted from my Cioci Kathy’s garden in Howell, NJ 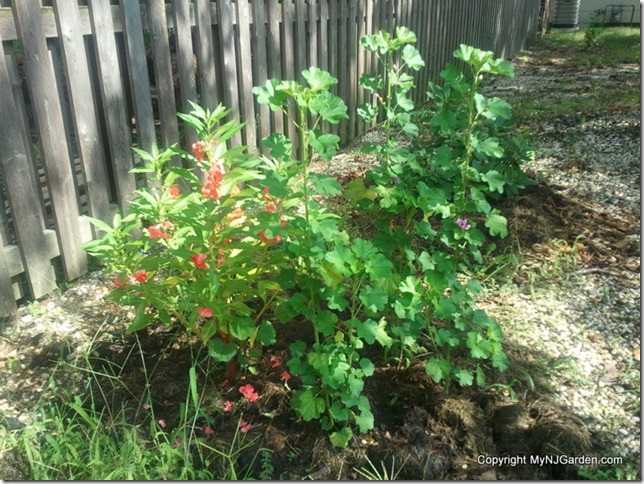 Hollyhocks I started from seed I bought from a seller on ebay. Strange thing is, that plant on the left with the pink flowers came up from one of those seeds that should have been a Hollyhock. What the heck IS that thing? It’s pretty though and then stem is real sturdy, probably an inch in diameter. I don’t mind it, I just don’t have any idea what it is.

UPDATE 4/26/12: A lovely commenter has identified the volunteer! It’s Impatiens balsamina (Garden Balsam or Rose Balsam) or “Touch Me Not”, so called because of the exploding seed pods after the flowers are gone. I collected some seeds and will be planting some on purpose this season! 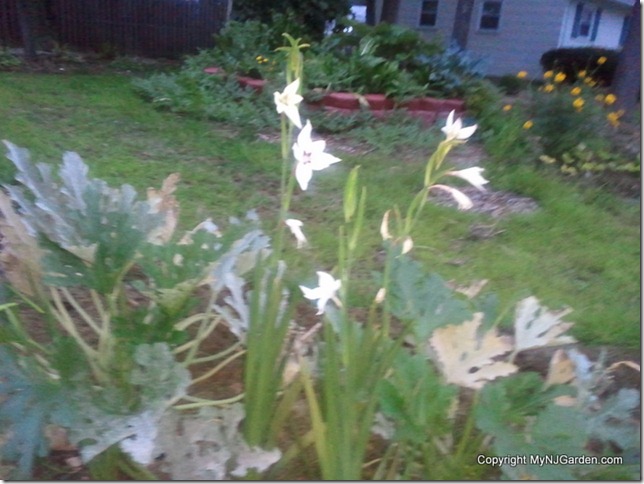 A blurry, washed out picture of some Exotica lilies that were included for free in one of my nursery orders this spring. They are lovely and had I almost forgot I put them in the ground until they started blooming.

2 thoughts on “Grass as Mulch and New Flowers Blooming”